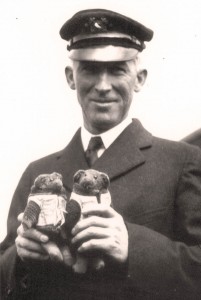 Teddy and Bruin, in their life-jackets, posing with Gar Wood. (ABM Archives)

Miss Detroit VII was built in 1924 by Gar Wood and originally named Teddy.  She and her sistership Bruin were named for the two teddy bears that Gar Wood always carried with him as good luck mascots when he raced.

Racing in the 1923 Sweepstakes race with Gar Wood’s brother George at the helm, she won the $10,000 first prize.  However, the victory was marred by controversy because one of her engine hatches blew off during the 43rd lap.  The racing rules of the time required that the engines be covered by hatches.  On the 49th lap, Teddy‘s missing hatch was replaced with one from Bruin, which by then had withdrawn from the race.  When Teddy was declared the winner, a major controversy ensued, as some observers felt that she should be disqualified for running several laps without the hatch.  Although the results of the race didn’t change, the name of the boat did.

Under her new name, she won Detroit’s 1924 150 mile Sweepstakes race in an event that W.G. Sheehan, writing for Yachting magazine, called the most sensational race ever staged in Detroit.  50 laps of the three mile course made for a grueling contest.  A field of 14 boats started the race including such notables as Edsel Ford, driving Woodfish, Caleb

Bragg in Baby Bootlegger, Horace Dodge’s Baby Horace and Charles Chapman in Miss Columbia.  Gar Wood jumped out to an early lead in Miss Detroit VII.  Despite strong challenges from Gordon Hammersly in Cigarette Jr., he led the entire race and won the $1,000 first prize with an average speed of 48.7 mph. 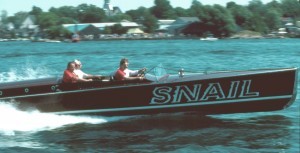 “I seldom write testimonial letters and I am quite sure that this is my first unsolicited one. However, I cannot quite seem to curb my enthusiasm for my Baby Gar…I am now completely sold on the idea that I have purchased all the costly experience of Gar Wood very cheaply indeed and the result is a magnificent, smooth running, exceedingly fast runabout…again, assuring you of my pleasure in owning one of these boats…” This 1926 letter from Edward J. Noble to Gar Wood clearly shows his enthusiasm for his new boat. With tongue-in-cheek, Noble named his new boat, one the fastest on the River, Snail.

Noble, president of the Life Saver Candy Company, lived in Upstate New York and was a summer resident of the Thousand Islands. According to local legend, Noble had a standing offer of $1,000 to the owner of any boat on the St. Lawrence River that could beat Snail in a race. Supposedly, no boat ever did beat Snail.

The Baby Gar model was Gar Wood’s response to the rules changes approved by the Gold Cup Racing Committee in 1922. Until that time there were few limits placed on boats that raced for this trophy each year. When Gar Wood’s race boats, with powerful aircraft engines, dominated the races for the fifth year in a row, the Race Committee decided to place restrictions on the types of boats permitted.  Often referred to as a “gentleman’s racer,” the Baby Gar could be also used for recreational boating as well as racing.

Baby Gars were powered with World War I Liberty aircraft engines that Gar Wood converted to marine use in his own plant. The engines developed 400 to 500hp and could produce speeds in excess of 50Mph. Snail is currently powered by her original 400hp 12-cylinder Liberty engine.

The Baby Gar cost upwards of $10,000 at a time when the average three bedroom home in America could be purchased for less than $4,000 and a new Ford sedan cost $750.  They were expensive, but pure joy to the wealthy sportsmen that could afford them.

In 1924, Gar Wood and his mechanic Orlin Johnson, costumed in coattails and top hats, entered a Baby Gar in the Buffalo Free-For-All Race, reacting to media accusations that Wood’s type of racing was not “gentleman’s.” It was also a stock Baby Gar runabout that made national headlines in April, 1925, when Gar Wood himself raced the 20th Century Limited passenger train from Albany to New York City and won decisively. It was through events such as these that the Baby Gar helped spur boating excitement for decades.

Today the Baby Gar is one of the most sought after vintage runabouts in the world. Snail, the 37th of only 68 built between 1922 and 1929, is one of eight that are known to survive.

With the Great Depression affecting boat sales nationwide, manufacturers such as Gar Wood began producing smaller, more affordable boats rather than the large luxurious speedboats like the Baby Gar. In 1934, Wood introduced a new 16’ split cockpit runabout, built in the Gar Wood tradition of quality, but with a very reasonable price tag under $1000, fully equipped . The message was simple and clear:  boating could still be exciting and affordable, even in rough economic times.

The great success of the 16’ runabout led Wood’s brother Phil to create a racing version of the model with a single cockpit, sportier look, and a more powerful engine. The Speedster had the look and feel of the popular European race cars, including features such as a gas pedal and automotive type shifting lever, not typically found in modern boats. Sitting just ahead of the transom in the Speedster places the driver in a position where clear visibility exists at idle speed or at high speed. When the bow rises prior to getting the hull on a full plane, forward visibility is lost. At high speed the visibility is wonderful because the boat rides perfectly flat on top of the surface. The design immediately caught the attention of Edward John Noble of the Thousand Islands Yacht Club.

Several Yacht Club members purchased Speedsters to establish a fleet for gentleman’s racing.
Miss Behave was originally purchased for $1,195 by George Bourne and was delivered to Fitzgerald & Lee, in Alexandria Bay on August 26, 1935, along with the Speedsters Miss Conduct and Miss Chief. Miss Understood and Miss Fortune joined the fleet the following season. They were raced until the start of World War II.

Miss Behave has spent her entire life in the Thousand Islands. She was originally powered with a Gray Marine 6 11hp engine and over the years she was equipped with a variety of more powerful engines. At one time she was powered with a V-8 Ford Interceptor that raised her speed to 60 mph.

The Speedster, a thrill to drive, brought lots of potential customers into dealer’s showrooms. However, most customers ended up purchasing the more traditional runabout styles with greater passenger capacity. The Speedster was remarkably popular, but very few were actually sold. The Speedster was only produced through 1938 with between 50 and 100 hulls ever leaving assembly line. Of the fourteen original Gar Wood Speedsters built, only six are known to survive. 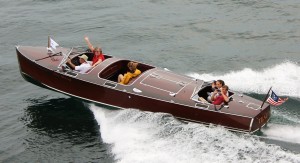 Although Teal may seem indistinguishable from many of the antique and classic boats on display, she was built in 1988 by Gar Wood Custom Boats of Brandt Lake, NY.

Teal is a wonderful example of how modern craftsmen are able to marry traditional design and modern technology to build both beautiful and resilient wooden boats. The hull was lofted and reproduced from a 1937 triple-cockpit Gar Wood model. By book-matching the Honduras mahogany planks, just as it was done at the Gar Wood factory, the hull planking appears identical on each side. Gar Wood Custom Boats make faithful reproductions like Teal as well as classically-styled runabouts of their own design.